Many fruit farms in the province of Zeeland (The Netherlands) are completely dependent on rainfall for water supply. What alternatives do these companies have to reduce production loss caused by drought? The POP3-project ‘More fruit with less water’ has investigated whether mycorrhizal fungi can help. 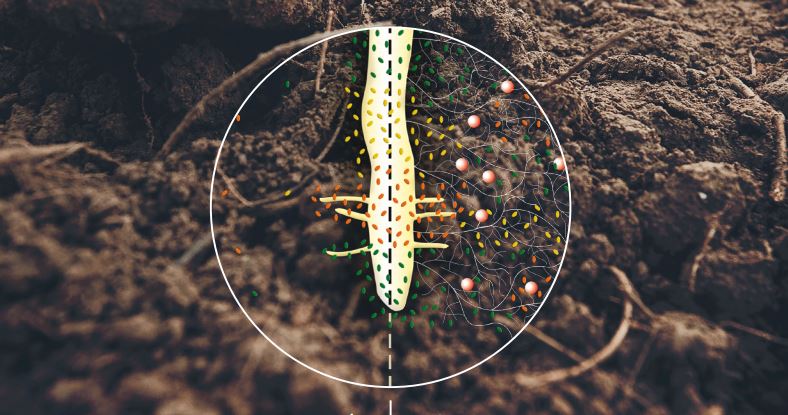 Mycorrhizal fungi naturally occur in soil. They fuse with plant roots and by that, they collaborate with each other (mycorrhiza). The plant provides the fungus with sugars, and the fungus provides the plant with additional water and minerals. Thanks to the fungus, the root volume of the plant increases. Additionally, roots are better branched in the soil because of the fine mesh of the fungus. The reason trees are injected with mycorrhizal fungi is that in the first years during drought, they have a better start in terms of growth and production during the first years. MycorDip products are believed to work better if no fertilizers are used at time of planting. The idea is that the salts are harmful to the development of the mycorrhizal fungi. In a first experiment with apple (Junami), we initially started using fertilizers at time of planting. After the first two years, we did not find any effect of MycorDip Universal on shoot growth.

In the next two experiments with pear (Conference) and apple (Elstar), we used an alternative organic fertilization (see Table 1) during the first two years of growing. After two years, we switched back to using regular fertilizer. Limited drip irrigation was used in the Conference, while no water was given in the Elstar. The results show that the use of MycorDip combined with organic fertilization in the first two years during drought provides a better start in terms of growth and production than standard fertilizer.

As for Conference, the use of MycorDip resulted in significantly 18% more shoot growth in 2020 (see Table 2). Shoot growth in the first four years increased significantly 20% (8.67 instead of 7.24 m/tree). In 2019, gestation and production were significantly higher. However, this was not the case in 2020. Up to that point, gestation was still low. No growth was measured in the first year of 2017, because planting was done late (in May) and as a result, there was almost no growth.

To conclude, MycorDip combined with organic fertilization mainly resulted in higher shoot growth during this period. This additional growth was very welcome, because growth on this piece of land had clearly been low due to the drought in 2018 to 2020. Normally, the additional growth will eventually also lead to higher gestation in this situation.

Additional growth can result in more evaporation, a more dry soil and ultimately, to less fruit growth. However, that was hardly the case here: fruits were 3 to 4% smaller, but these differences were not statistically reliable. In the Elstar experiment, the usage of MycorDip combined with organic fertilization also led to significantly more shoot growth (see Table 3). From the first to the third year of growth, there was a total of 25% more shoot growth. Total gestation over the first four years significantly increased by 14% (in the first year, all fruits were thinned out). The production in kg/tree was almost significantly different. Average gestation in the last three years was 21, 30 and 102 fruits/tree respectively, with average fruit weights of 147, 145 and 116 grams/fruit. This means that in this experiment, we found both a positive shoot growth effect as a positive gestation effect, without this being at the expense of the fruit weight. The average mycorrhizal occupancy of the roots was 27% on 20 November 2019 in the Conference experiment. This was also the case in the Elstar experiment (measured on 26 October 2021). No significant effects of the treatments on the mycorrhizal occupancy were found.

The extreme variation in the measurements in samples from the same treatment, was striking. In this case, only very large differences can be demonstrated statistically reliable. On the other hand, these results indicate that mycorrhizas also develop if no injection is done at time of planting.

The POP-project ‘More fruit with less water’ is being carried out by the NFO (lead organization), Wageningen UR (project initiative and project management), Meeuwse Handelsonderneming, Fruitconsult, Bodata, Delphy and seven fruit farms in the province of Zeeland. The project was financed by the province of Zeeland and by the European Agricultural Fund for Rural Development: Europe invests in its countryside.